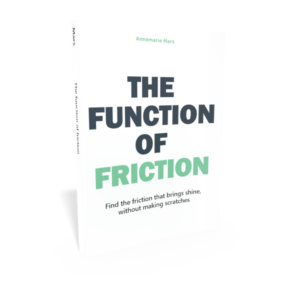 De functie van frictie (The function of friction) is a book for everyone who wants to make a change and who seeks the conversation with other people to make this happen. Because change comes about in the conversation that we have about it.

In this conversation, we touch each other, seek each other out and collide with each other. This friction and grinding has a function. It enables us to make a difference. To get to a better place together. If necessary.

Yet in this conversation about change, friction and negativity is also released that only gets in the way of movement. The friction then gives scratches. You end up on opposite sides of the table and you get no further.

But you don’t want friction all the time either. The conversation also needs moments of rest, of calm, reflection and connection. So that you can cherish what is there and recharge for the next step. This rest feeds the brilliance.

And we can have too much of that rest. People are then resigned or remain aloof. That calmness is narcotic. The brilliance ebbs away.

The book consists of four parts. Because in every conversation there are roughly four subjects to discuss: content, control, behaviour and the relationship. With each topic, several fields of tension lie in wait. In the way you deal with each field of tension, you determine whether you bring shine or make scratches.

In The function of friction, I examine twenty such fields of tension. In this way, various pitfalls that we use to release dysfunctional friction become clear. Such as glorifying change, covering up problems with positivity, playing on feelings, fleeing forward, resistance against resistance and stepping into the ring. With each pitfall, I show you interventions with which you can bring back progression. For example, recognising feelings as the engine for change, putting your pain and desire on the table, choosing the most appropriate control, striving for commitment and finding your loyalty again.

But we must also be realistic. Complexity is your constant companion. The only certainty you have in change is that afterwards you know how you should have done it. It is an illusion that you will not make scratches. So in every conversation, you are alert to a change in energy, so you can find out what is going on. You welcome friction as a sign that you are not yet finished searching. Because that is the function of friction.